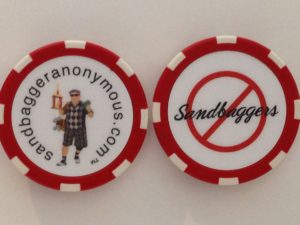 Golf can best be defined as an endless series of
tragedies obscured by the occasional miracle,
followed by a good bottle of beer.

How do you know you have been sandbagged?

Have you ever seen the USGA Chart “The Odds of Shooting and Exceptional Score”? You should take a look at it. It puts numbers to your suspicions!

Now you know! If a man plays 60 rounds a year (lucky devil) He’ll shoot that once every 20 years!

Robert Carney’s article from Golf Digest November, 1987 shows it is a plague that has been acknowledged for many, many years. This is one way of protecting yourself but it doesn’t weed out people who habitually manipulate the handicap system. Maybe “Jaws” is personable and fun to play with but he still on some level desires an advantage. You play him for a beer and keep the stakes low. Others can be handled in different ways. Enjoy this article. It may allow you enjoy your game and still play a match.

18 Excuses for Not Turning in a Score

by Robert CarneyThis really happened. We were negotiating a small wager on the first tee a week ago and I asked my friend Jaws for his handicap.“Twelve,” he answered, “and you’re a 6 so I get three shots a side.”“Wait a minute,” I said. “What about the 75 you shot at Winged Foot West last month? How can you still be a 12 if you shot 75 on a course rated 74.5?”“I didn’t turn that in,” Jaws answered. “My club won’t take any scores shot out of the section.”There’s always a reason. People who don’t turn in scores, especially low scores, always have a good reason. So do people who hold up 7-Elevens. but “Round Outside of Section” was a new one on me. I added it to my list:

Terrific excuses, all, but Round Outside of Section, for some mysterious reason, was my Eureka. The clouds parted. I saw the light.Aha, I said to myself, I have a U.S. Golf Association Handicap. A lot of other people don’t. The USGA Handicap System, according to its manual, “is based on the assumption that every player will…report every acceptable round for handicap purposes, regardless of where the round is played.”Acceptable rounds, says the USGA, include rounds of 13 holes or more (Foreshortened rounds are completed by giving yourself on the remaining holes a par, plus any strokes you’re entitled to. If you’re a 6 and the hole is ranked 6 or lower, you take a bogey.) They include out-of-section or out-of-state rounds. They include match play rounds.(If you’re conceded a putt and it’s improbable you would have made it, add one.) They include rounds played with spouses, children and small animals tagging along. They include rainy rounds and sunny ones. You can wear a swimsuit and slippers and it still counts. As long as you’re playing the Rules of Golf, i.e., not playing two balls.I recently played six rounds in Ireland on courses with no course or Slope ratings. Do I turn them in? Absolutely, says USGA Director of Handicapping Dean Knuth. My handicap chairman will determine an approximate course rating based strictly on yardageJaws considers this hogwash. He’s a 12 under a system that allows the discarding of scores shot out-of-state, out-of-section or when playing with his wife. He also doesn’t count incomplete rounds, vacation rounds or rounds played on courses where he forgot to get the Course Rating.So my 6 and his 12 are like apples and oranges. I should have my head examined for even thinking about giving him six shots.This is not sour grapes from a guy who can’t play to his handicap. I play to it frequently or I wouldn’t have it. Nor is it an attack on sandbaggers–though it amuses me that fellows who regularly rail against the welfare system should rely on what amounts to a handout system when they play golf. Still, all’s fair if it’s the same handout system we’re using.But we’re not. Handicaps were meant to allow players of different levels to compete on an equal basis. If those handicaps are based on different systems of collecting scores, then that’s not possible.Thanks to Jaws, I have a new policy toward first-tee negotiations. If your handicap and mine are close to the same, within a couple of strokes, I’ll suggest we play even. If they’re not, I ask this question: “How many of your last 20 rounds did you record?” If the answer is 20, I’ll ask for or give the difference in our handicaps. If the answer is other than 20, I’ll be happy to play even–or for fun.And I’ll buy you a drink with all the money Jaws has saved me.ROBERT CARNEY, A SENIOR EDITOR AT GOLF DIGEST, COMPLETED A BROCHURE WITH USGA DIRECTOR OF HANDICAPPING DEAN KNUTH ON USING THE SLOPE SYSTEM.