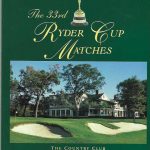 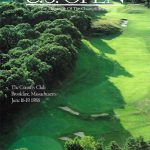 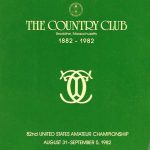 Sitting here reminiscing of the round I played at the Country Club so many years ago. I was privileged to be hosted by the club Historian Louis Newell and played with golf buddy, Chris Gagne. We played the Open Course (well not the open tees) The Clyde, the Squirrel by Willie Campbell and holes from the Primrose by William J. Flynn. We were allowed to play the four Primrose Course holes that were part of the 1988 US Open. I can’t remember what I shot but to be squired around seeping in the history of the club can’t be expressed adequately. I once played out of Longmeadow CC in Western Mass (1927 Donald Ross) so playing on the first course in America couldn’t be more special. The club was one of the 5 charter clubs of the USGA. It started as an exclusive club with a race track. In 1913, Francis Quimet, a former caddy, groomed by Willie Campbell, the club’s professional. who grew up across the street from the Country Club won the US Open, with Eddie Lowery on his bag. (Deemed the Greatest Game Ever Played) 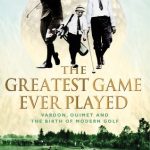 He beat Professionals Harry Vardon and Open Champion Ted Ray. The 50th(1963) and 75th(1988) US Opens were played there and for some inexplicable reason the 100th Anniversary US Open was played at Merion (2013). The US Amateur was however played at the Country Club. Wondering if co-leader Matt Fitzpatrick of 4th round can win at the CC as a professional.

After the round enjoyed a tour of the club and the basement. Yes, the basement, store house for club’s tournament programs. Gifted a few by our host. A day to remember!